WHY ANALOG-TO-DIGITAL VIDEO PRESERVATION, WHY NOW.

WHY ANALOG-TO-DIGITAL VIDEO PRESERVATION, WHY NOW.

How I Learned (Almost) Everything I Know About ½” Video from Dr. Martin Luther King, Jr
by Moriah Ulinskas, Former Director of Preservation

Early this year I received a call from the librarian of Manchester University, a small, faith-based university, regarding a video recording they wanted to have preserved and transferred to an archival digital file. The video was a ½” video reel which had been in the school library for 40 years and had been unplayable for almost as long.

In conversation with the librarian I learned that the tape in question is a recording of Martin Luther King, Jr. My first assumption was that this is a film-to-tape transfer – a video dub of an original film – but the librarian assured me that it was not. This was a source recording which the school had not been able to play because, as a note taped to the box says: “it is our understanding that no machine can be synchronized to produce visual showing of the tape enclosed here”.

Half-inch video tape was the first consumer grade video tape made available in the U.S.- meaning it was the first time equipment for recording and video playback (a medium used in television and government since the 1950s) was available to people outside “the industry”.

The most common form of ½” video in anyone’s collection today is what’s know as ½” EIAJ- a compatible reel-to-reel video tape that was manufactured by multiple companies and which enabled the widespread growth and exchange of home videos, educational video, and of course video art. Invented in 1969 and in use well into the 1980s, the ½” port-a-pak is synonymous with experimental video, performance art, and independent documentary. 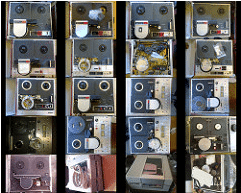 Here’s one thing about BAVC Media: we are hoarders. We keep at least three ½” playback machines running at all times and have over a dozen on hand to be pulled for parts and repairs. We are at the tip of the ½” preservation iceberg and we’ve been doing this work for 15 years now.  Half inch playback machines stopped being manufactured in the mid 1970s and the video heads for these things are fragile and rare. I know of two people left in the industry who can service these decks, yet I get calls every week from people sitting on collections of ½” tapes in need of preservation. I tell all our clients and partners that they have 5, maybe 10 years left in which they can have these works preserved and transferred and then these recordings are gone for good. And this brings us back to Dr. King.

We received the reel from Manchester University and it seemed to be in good condition. It did not suffer from sticky shed syndrome, a common issue with ½” reels, and it did not require any extra cleaning. When we played the tape the image was a mess of rolling horizontal lines, but the sound: Dr. King’s unmistakable, unshakeable baritone boomed through the speakers of our preservation suite, with surprising levity and humor.

We tried running the signal through each of our four time-base correctors, we attempted to play the tape on multiple decks, then we had an “a-ha” moment looking at the date of the recording.

Feb 1, 1968 was the date of Dr. King’s last speech to students on a college campus, as he was assassinated just two months later, and this was the sole recording of that speech. The date of the speech was the immediate clue for us as to why the tape had remained unplayable all these years.

Lesser known than EIAJ ½” is Sony CV video: a ½” video format developed in 1965 and discontinued in the early 1970s.  CV, or “skip-field”, video machines recorded a poor picture quality and were not designed for interchange, meaning a tape recorded on one machine was not intended to be played on another. To this day CV recordings are challenging to play without running them through a gamut of time-base correctors, and CV playback machines are almost non-existent. And, of course, BAVC Media happens to have one in its pile of obsolete but priceless analog video equipment.

After some fussing with cables and cords and fuses, the magical moment came as the image of a podium appeared on screen and Dr. King stepped up to the microphone.  It’s not a great image. Because of the format the video itself is dull, ghosting, and dirt on the lens is visible throughout the entire recording. But the significance of moment and the words spoken ring true today.

I have now sat through this recording at least five times in attempts to correct and stabilize the image and produce the archival digital file  And every time a shiver runs through me as I hear these words spoken and I reflect on the time in which they were spoken and the times we face today.

These are the legacy recordings I refer to with such urgency when I talk about the immediacy and importance of video preservation. These moments of political and cultural significance that inspired someone, 40 years ago, to hook up a camera and record this tape which we’ve inherited from dusty basements and disregarded shelves. If we do not do diligence in transferring these recordings to new formats, as the originals become impossibly obsolete, these are the moments and the messages we will lose forever.

For more information, check out https://bavc.org/preserve-media